The tallies are in for the Sonoma County Fair’s Junior Livestock Auctions and the sale numbers show yet another record-breaking year. The total gross for the auctions, which concluded Friday night, was $1,583,789, over $76,000 higher than the 2016 total of $1,507,304. The auction first broke $1 million in 2007 and sales have steadily risen each year, due in whole to tremendous community support for youth in agriculture.

Two hundred thirty nine lambs were sold for a total of $378,432 and an average price of $11.35 per pound. Missy Pendleton of Sebastopol FFA exhibited the Supreme Champion lamb. The animal was sold to Northern Electric for $19 per pound for a total of nearly $3,000. Missy plans to donate her earnings from this sale to the Oakland Children’s Hospital that cared for her five years ago while she battled a flesh-eating bacterial infection obtained from a cut on her leg at her family’s farm.

Thirty five market goats were sold for a total of $37,489 and the average price was $12.02 per pound. Justine Bowers of Forestville FFA exhibited the Supreme Champion Market Goat, which sold for $10.50 per pound for a total of $861. The goat was purchased by Hansen & Miller Law Firm.

The average seller’s price for rabbit meat pens (three per pen) was $401.92. Blaine Mills of Forestville 4-H exhibited the Champion Meat Pen, which was purchased for $1,000 by Cryo Genetics Inc. This year’s rabbit auction included thirty nine pens and totaled $16,075. 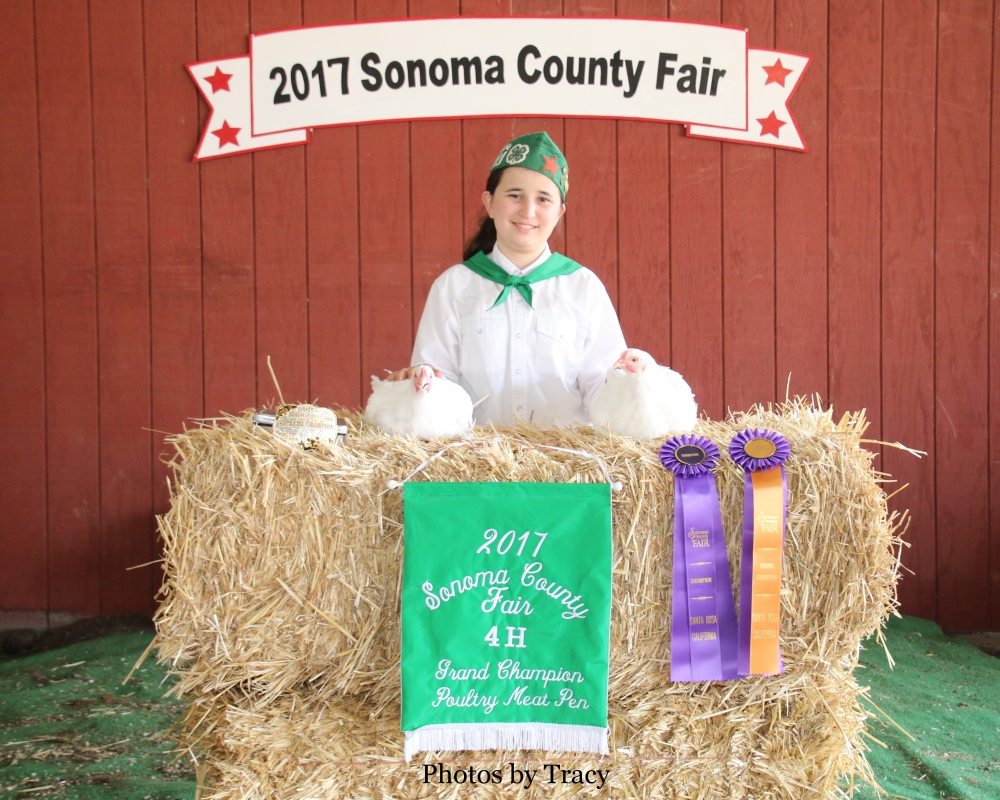 Poultry meat pens (two per pen) sold for a gross of $25,300. The thirty six lots sold for an average price of $691.67 per pen. Ella Bratton of Penngrove 4-H exhibited the Supreme Champion Poultry Meat Pen which sold for $2,700 and was purchased by Frizelle Enos Co. of Penngrove.

A total of seventy seven Market Steers sold for a total of $517,585, up about 11% over 2016. The Supreme Champion Steer was shown by Maria Bartlett of Sebastopol FFA. The animal sold for $11 per pound and was purchased by B&T Bartlett Farm Equipment, Joseph Camozzi, Cunningham Dairy, Cotati Large Animal Hospital, Plus One Professional, Water Connections & Constellation Brands. The average price for the steer auction was $5.25 per pound. Cassidy Carroll’s steer broke the record setting price per pound at $14. The animal was purchased by Reuser Inc. & Doss Logistics. The record price for a market steer at the Sonoma County Fair Junior Livestock Auction was $13.50 per pound in 2016.

Last but not least, three Youth Ag Mechanics projects were auctioned off at the beginning of the Market Steer Auction. The first item was a rustic wooden bar with metal frame and a lighted plasma cam deer cut-out. The exhibitor, Dominic Ayers sold the bar for $2900 to buyer Kim Bage of Santa Rosa. Next, exhibitor Zachary Bunker of Petaluma FFA sold a six foot redwood picnic table to Seghesio Family Vineyard & Winery of Healdsburg for $500. Jaden Varville of Petaluma FFA sold her three legged leather hunting chair to Montecito Development Corp of Fulton for $350.

A total of 443 4-H, FFA, and Independent Junior exhibitors worked hard all year to select, raise, groom and feed their animals, and only the very best are selected for sale at the Junior Livestock Auctions. Community support for their dedication has never been more prevalent. Sonoma County Fair salutes these hard working youth and the generous individuals and business leaders who continually contribute to the Junior Livestock Auction.